I read this story in the trade press some months ago, and other bloggers picked up on it too, but all we had then were pictures.

I was surprised, therefore, to stop by my local Sainsbury’s Express (attached to a petrol station) and see a whole promotional shelf of these boxes. 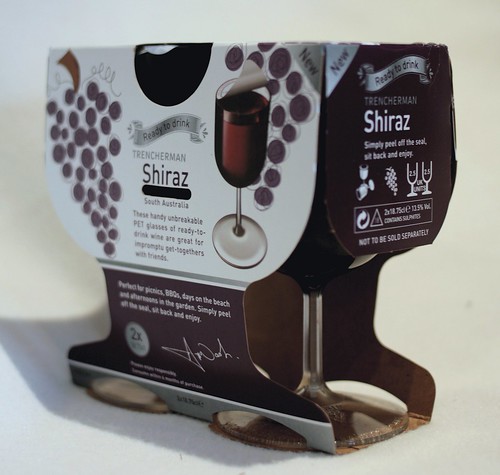 Each box (retail £3.99) contains two 187.5ml PET glasses of wine. I thought I’d pick one up to examine the product in the interests of checking out new packaging experiments – I’ll be honest and say I had low expectations on the wine, however. Am I too close-minded?

Well, the twin glass box idea is certainly innovative. A cleverly folded light cardboard box holds the two glasses that, apparently, have been designed to be near indestructible. I have not tested that point.

I chose the red. This is a South Australia Trencherman Shiraz 2004, 13.5% ABV [which also contains sulphites (who would have guessed!)]. I’d love to give you a tasting note, but as you know I don’t generally do that on this site. I did consider it, but as my notes started with “overripe nose”, “cooked”, “past it” and “bitter finish” I probably shouldn’t.

[To be fair to it, the lot number on the glass was L7185HA5 which I interpret as the 185th day of 2007 which would mean that this wine has already passed its 6 month shelf life. I have emailed the company to find out.]

So, what about the idea in principle? 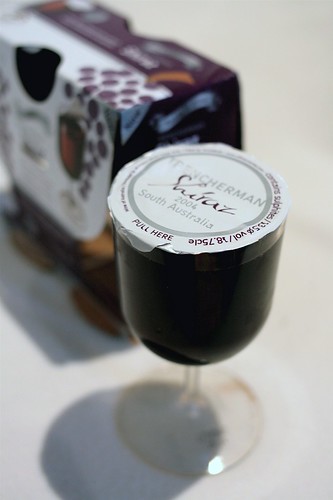 The package says that the wine is:

“Perfect for picnics, BBQs, days on the beach and afternoons in the garden. Simply peel off the seal, sit back and enjoy”

Most packaging innovations claim to be about the environment as well as convenience, such as the tetrapack and the pouch. Although the glass is recyclable PET this is almost entirely aimed at the convenience market. It claims to be replicating the ‘single serve’ options of beer, cider, etc. with something more appropriate to wine, hence the glass.

IF I happened to be going to a picnic, and IF I chose not to have a bottle and ALSO did not have my own glasses to bring, I might like to have this option, but I somehow don’t see it working.

The problem really is that as you are appealing to a cross section of wine drinkers (those who happen to want to drink wine at a picnic or BBQ) it is very difficult to do this only with one style of wine. However popular South Australian Shiraz (or Chardonnay, or rose) is, it still does not appeal to a lot of people. Also, the wine is aimed at the lower end (in terms of wine quality) to try and reach the masses, but how many people really think “I wish I had just 2 glasses of wine to take with me”?

It would be much better to sell empty picnic glasses alongside the range of wines rather than pre-filling them.

Even if it did take off, after you have bought one box, you now HAVE the wine glasses for your picnic. You don’t need any more, so why continue to buy it? The idea that you might buy the glasses to re-use them is rather far-fetched.

All this, of course, is added to the fact that at 187.5ml of wine, the ratio of plastic to wine makes this packaging rather environmentally “challenged” to say the least.

I can’t help feeling that this is a PET drinking vessel solution looking for a problem, rather than the other way around.

However, encouraging people to drink slightly less, and offering them something better than the standard white plastic cups used for water coolers to drink out of, must be a step in the right direction.

I look forward to how this project develops, particularly over the summer as the BBQ season kicks in.