When anyone says “I just don’t have the palate for wine” or “I can’t taste all those ‘things’ other people talk about in wine” I try to point out that we pretty much all have exactly the same ability to taste, but we all have different experiences, vocabulary and confidence. 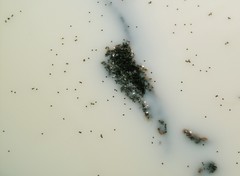 It isn’t that they CAN’T taste wines, they simply are not used to analysing what they are experiencing, often because they haven’t really bothered before.

It is a matter of education, not in the sense of classes and diplomas, but just taking the time to taste, and most importantly, SMELL things.

The importance of smell to the enjoyment of wine starts early.

I was reminded of this only yesterday morning. On our arrival at the airport (at 6 am after an overnight flight), a fellow passenger managed to smash a 1.5 litre bottle of dark rum he had bought Duty Free (probably for the best!).

I barely paid attention, though noticed ‘a’ smell.

My wife complained about the “smell of alcohol”

She’s absolutely right. It DID smell of vanilla more than anything else (that she’s used to smelling).

When was the last time you took a second to ‘smell’ vanilla? I’m off to do it right now!

Let’s encourage kids to smell and discuss food, ingredients …  even wine … then hopefully we will all enjoy experiencing things more, even alcohol spillages at airports.