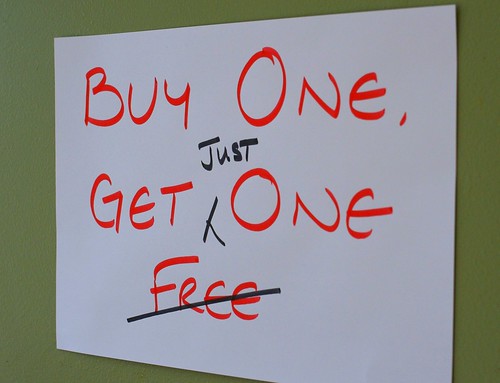 It used to be “bog off!” or, more correctly BOGOF, Buy One Get One Free

Now we may be moving to the post-BOGOF era, or BOGJO – Buy One, Get Just One (but maybe with a discount).

According to the news in Harpers today that in turn were quoting a report in The Grocer (who have a closed site), BOGOF deals in UK supermarkets are being scrapped because consumers are suddenly realising that a greater volume of stuff you didn’t want is not necessarily a “deal”.

It seems initially counter-intuitive to those of us in the UK who have had volume deals rammed down our throats, quite literally in the case of wine, but being convinced to pay a greater sum of money in exchange for more “stuff” is not good for our wallets or the environment.

Coincidentally, WRAP also announced today that UK consumers waste 3.6 million tons of food each year, most going untouched before ending up in landfill sites. As they say, we pay 3 times for this waste: paying extra money for the food in the shops, paying to deal with the waste and its transport, and also paying an environmental cost as waste ruins the environment.

I can see this in my own life. I have jokingly referred to the fruit bowl beside me here as my “pre-compost bin” as so much (organic) fruit I receive on a weekly basis goes off while I munch biscuits, sometimes bought in BOGOF deals, instead (for the record, I have a series of compost bins in the garden full of very happy worms).

And what about wine? BOGOF deals in wine are very common, but how many consumers really wanted that extra bottle of the £8 wine, when they could buy 1 bottle for £6, getting potentially better wine and still saving £2.

There have been many complaints that wines sold in this way were not worth the price tags they announced, and in fact their value was closer to the ‘deal’ price, so in fact there was no benefit to the consumer. In this case, consumers were losing out by having to pay for more bottles they hadn’t intended to buy.

There is some truth to this, especially if consumers feel they have been misled, but I think the pricing issue is not the key point. Who is to say whether the wine should be sold at £7.99 or £3.99? Wine pricing is not, and should not be, exclusively about COST, but I think I’ll leave the “How to Price a Wine” debate for another time.

The most important point is that ONLY those wines that could generate sufficient marketing funds to pay for BOGOF deals AND to get placed in those end-of-aisle bins (known as Gondola Ends) were getting the promotional slots in the supermarkets. Therefore only those wines backed by the deep-pockets of multinationals, or those that charged a higher price for wines when not on promotion, were reaching the consumer.

If this is now changing, more wineries that have smaller budgets might get a chance to be seen & heard. They may still have to find money to fund 30% or more discounts (we will not be weaned off deals that quickly!), but that is a very different story to a BOGOF.

As I have said before, wine ‘marketing’ in the UK has been too concerned with pricing and discounts, and not enough about the wine itself for long enough. If we can see a silver lining in the dark clouds of climate change and the global credit crunch, it should possibly be that the time really has come to drink less wine, but better wine, and for wine companies to speak up about the environment, sustainability of agriculture, and agricultural economies too, and also to help lighten the gloom.