He’s frank (actually he’s Harry, Harry Haddon), he’s funny, he seems knowledgable and most importantly, he has access to a video editing tool. 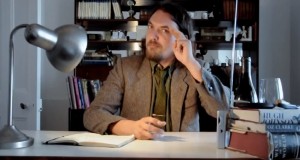 At last we have someone new who might be able to make a wine video worth watching – there are surprisingly few who have achieved this.

Wine discussions should not have to be restricted to printed text – so we particularly liked the “wine for non-readers” title.

Do check out the “First Video Post – Foreign Condescension and The Aristargos 2012” by Wine and I’s Harry Haddon and encourage him to make more videos like this – he deserves a much wider audience. This is by no means polished yet (it would be good to invest in a microphone; sound matters too), but there is potential here.

Harry, if you are reading this, you are right, we all hate the “sit in front of a camera and sniff & swirl for ages” stuff, so maybe cut the technical stuff down to minimum, and focus on sharing more of the “if this wine were to go to a picnic, it would wear suspenders and a straw hat” stuff.

Now, I’m off to meet this wine and invite it to a private picnic, just the two of us.

It is that time of year when all sorts of wine competitions take place and announce their annual procession of gold, silver and bronze medal winners.

Countless self-congratulatory press releases, blog posts, status updates and adverts will blast out in a storm of activity that will effectively drown out the benefit of any one win and leave only one certain winner, the competition itself. 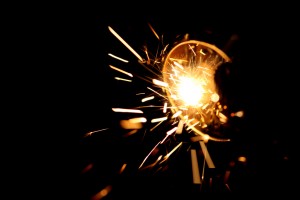 All spark, no fire (photo by Daniel Dionne)

Not only did the competition receive the fees, and it is the only constant in each and every message. Free branding. Well done! Have a Gold Medal for that!

I’ve been considering the vastness of the wine world and I understand the need to find a way to stand out from that crowd, but I am not at all certain that a wine competition with thousands of entries, and thousands of “winners” really helps.

Judging wines in an annual contest is a bit like judging the ‘best spark’ around a campfire. Millions are produced, some may even be brighter than others, but ultimately they all fade and leave little or nothing behind. What we should be looking for are those that can, and do, light the bloody fire and make something happen!

You’d think that after sitting in the dark, judging the intensity, duration and colour of the sparks flashing before their eyes, the judges themselves might ask themselves, “What’s the point”?

Some competitions may have stricter rules, more numerous categories, or more “qualified” judges, but fundamentally they are all doing the same thing.

What I long for personally is a competition that looks holistically at a wine – maybe at a track-record of quality production, but also at the story, the tradition or innovation, the ability to engage with consumers and more. Awards that are like achieving a masters degree not just aceing a school report.

Measuring the intensity of the fire produced, not the momentary spark.

Who can offer me that? I might then care about the results.

Everyone uses the term ‘sustainability’ these days, but what it means to everyone can vary enormously.

From simple carbon reducing measures, such as using lighter glass bottles and renewable energy, through changes to vineyard practice including organics, and even wholesale regional programmes, the term covers many issues and different levels of commitment.

When the issue of “Sustainability in the wine trade” was raised with a cross-section of the world’s wine trade on Vrazon’s AccessZone at the London Wine Trade Fair, what was noticeable was the ambition and commitment of producers from Australia and New Zealand and their assumption that this was a collective task. There were also interesting stories from Europe, but they tended to be from individual producers taking unilateral steps, often at a cost and risk to themselves.

Many of the answers revolved around what needed to change in the vineyard and the winery, and interestingly, how ‘sustainability’ is not synonymous with ‘organics’ (or is that the other way around?). There were a lot of laudable changes proposed to how we treat vines and how we protect water resources for example. There were also allusions to alternative packaging for wine and to philosophical approaches such as Natural Wine (more videos on this will be published soon). It made me wonder whether the driving force for these changes came from a concern for the planet, as a reaction to a consumer demand for action, or simply because they made business sense to those businesses with an eye on the future?

The answer, of course, was “all of them”, but I am not convinced that there is sufficient consumer awareness of the issue as it affects wine for ‘sustainability’ to be a positive differentiator for a wine or winery, and so any sustainability projects needed to be either required of all businesses (by governments, regional authorities or even retailers, to avoid some producers taking all the risks) or carefully tested for commercial returns on investment.

What do you think the future of ‘sustainability’ is for the wine business, and how might this topic be made more relevant to the wider wine trade?

This was only one of several topics raised for WineConversation Unfiltered. For this and related topics, visit: wineconversation.com/unfiltered

Try this exercise. Imagine the world in 50 or 100 years. Picture the innovations, the changes to everyday life, and the things that will remain the same. How will life for you or your kids be different? 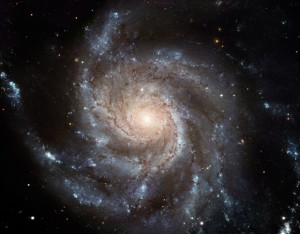 There’s wine Jim, just not as we know it

[Maybe have a glass of wine while you think about it, why not?]

Here’s a shortcut. Think of any number of “sci-fi” films or series set in the not-immediate future. Spaceships, robots, physical chaos and massive-overcrowding, utopian societies and post-apolcalyptic zombie-filled misery. Take your pick.

What do all these visions have in common? NO WINE!

Name ONE of these films/series set more than about 50 years from today in which wine (not alcohol in general, there’s lots of that, but the product of grapes grown in vineyards) appears in any meaningful way?

I’ll start you off, and then challenge you to add to this list with me:

1. Captain Jean-Luc Picard, Star Trek – The Next Generation
Captain Picard is supposed to have grown up in the vineyards of a future France, and occasionally drinks his family’s Chateau Picard wines. So there might still vineyards in around 400 years time.

I personally cannot think of ANY other film that features wine, and I’ve asked several film experts for help.

Is it because wine is the kind of ‘agricultural’ product that we believe science will replace with something ‘better’?
Will future alcoholic discoveries make wine’s variety superfluous?
Is wine just one of those traditions we are even now just barely hanging on to?

Or is it because, despite consuming more wine today than we have ever done, we still lack an understanding of its importance to our culture (past, present and future) and so just take it for granted? Is it because the types of people who write science fiction screenplays are afraid, or don’t feel qualified, to talk about wine even if they can decide the fate of the universe?

I look to the future because that’s where I’m going to spend the rest of my life. – George Burns

Not really, but there are plenty of films that still feature cars with combustion engines when other energy sources exist, revolvers being used in fights against lasers, or even sex when test-tubes can apparently do the job.

We have a responsibility to make wine sexier* and more important to consumers and to writers if we want to ensure those who are imagining and building our future have a bottle of wine mentally placed on the table for us to enjoy.

Your future is whatever you make it. – Dr. Emmett Brown (Back to the Future III)

If you know of any other example of “future wine” do let me know in the comments so I can build a list for my future viewing. I love wine and I love sci-fi and I would really like to combine them

WINE IN Sci-Fi MOVIES and TV (List to date):

* of course by this I really mean “more appealing” as we must not, of course link wine marketing with sexual attractiveness, that would be irresponsible.

“How the Internet Changed my Business” is a great introduction for some thoughts on the excitement of the Access Zone at the London Wine Fair last week.

Not only is this something that we at Vrazon talk about a lot, but it was also the first session and one that we got some great feedback on. In some ways, the whole point of the Access Zone programme and ethos is to showcase the ideas and opportunities of social media for the wine trade, and kicking off with the stories of three people who are not the usual suspects, talking from a perspective beyond the usual winemaking or retailing one, helped to set the scene.

We are so grateful to our MANY friends who came by to say hello, to contribute to the programme and also to contribute to the informal networking and advice that happened on the AccessZone. It was wonderful to see so many great wine content creators from around the world stopping by in London from bases in France, Italy, USA, Portugal, The Netherlands, Spain and Canada (did I miss someone?). If you’ve created some content on the fair or the access zone, let us know so we can share it.

Over the next few days and weeks we will be publishing and commenting on the sessions that were all recorded & produced so professionally by our friends at Mad Cat Media (HIRE THEM NOW!). We will also start to publish the series of interviews that were conducted on the stand with many influential figures in the wine business for our “Unfiltered” series. These are being edited and made ready as we speak and will be a great resource for anyone interested in the future of wine. Keep an eye on this site.

We also have to congratulate Catherine Monahan and Robert Joseph for the success of Wine-Stars which took place on the Access Zone on the Thursday (visit their site to learn more about this event). Vrazon was very happy to have been able to support the activity and help to bring the event to life and record the proceedings for the world to experience. Good luck to all those involved, especially the fantastic wineries who took part.

If you missed any of the key sessions, such as the announcement of the Born Digital Wine Awards 2012 winners, or the presentation about the EWBC Digital Wine Communications Conference in Turkey, all these are available now.

Thank you so much to the partners who helped us make the Access Zone happen including the London Wine Fair, Laithwaites, Wines of Turkey, the Circle of Wine Writers, p+f wineries, freewine and others.

In the meantime, do watch and enjoy this: