I just received the latest email marketing campaign from Naked Wines (the UK office – now that they have a presence in the US and Australia this probably needs to be stated), and I’m a little disappointed.

I’ve always thought highly of their marketing savvy. The move to rate wines not by stars or points, but simply by whether you would buy the wine again, was genius.

No matter what you thought of the actual wine range, they managed to connect with the audience they were targeting, and speak to them in a positive way, involve them in the business, and create a strong user community. It fitted the honest, or ‘naked’, approach they claimed to favour.

What rankled in the latest email – “Become a wine genius in about 52 seconds” – was that they sent a quiz (I’m a sucker for a wine related quiz, and I had 5 minutes with a cup of tea, and they promised it would take only 52 seconds, so …) to see if I was a “Wine Genius” but instead of a quiz, I got a lecture.

It really surprised me.

There are 6 questions, most of which are slap-in-the-face obvious marketing statements, such as: 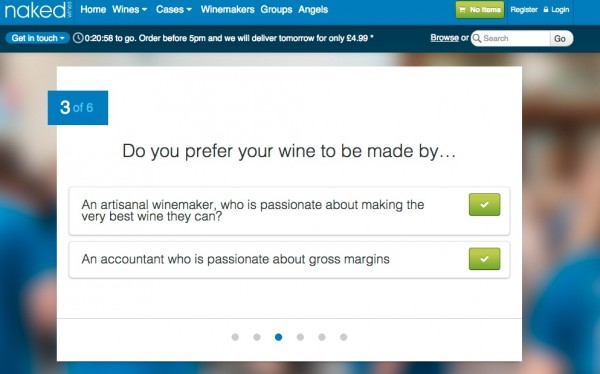 Tricky one this one

“Well, let me see … now, I think I remember studying that at school, just a minute …”

However, two things really surprised me. It wasn’t just the questions, but the approach taken to the answers.

The first question was:

Now, I would argue this point. I know what they are getting at, but since they do not define “costs to make” but one could certainly argue that the true cost of hand-picked grapes, made in small quantities, aged for years in cellars and carefully prepared and presented to the customer could cost more than £10 if the winemaker wanted to survive, invest in the winery (and pay off debts), stand out from the crowd, and also pay others fairly too.

The next question was a false choice between traditionally packaged wines and screwcap bottles: 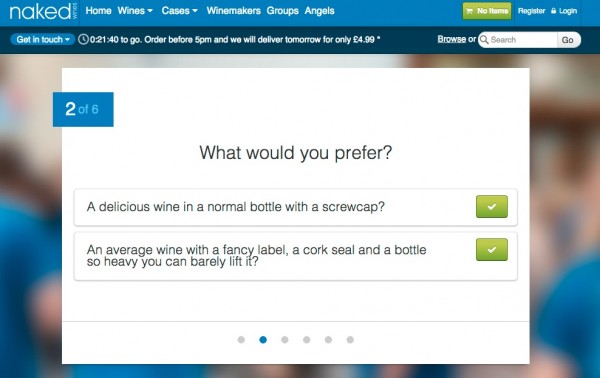 Ignoring the biased “delicious vs average” aspect, there may be plenty good reasons for preferring the traditional packaging (for example, I might like to keep the wine for some years then use my Coravin), but apparently I MUST conform to their packaging mantra, or else!

And this was the second, and major point. Apparently, I’M WRONG.

We hear a lot about making wine more accessible, less frightening and stressful for consumers. I believed Naked Wines agreed. However, it seems that if I suggest that I might like a cork, or that it actually might be possible to believe that wine costs over £10 to make, it is not a valid opinion, and I am simply wrong. Like this: 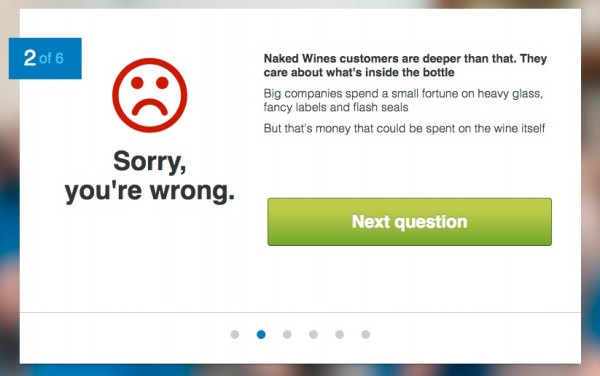 Naked Wines customers are deeper than that! (oh, and that “small fortune” can’t be that much since they’ve told me that it still has to come under £10 all in!)

The good news, is that despite disagreeing with all their questions, and being consistently wrong, I am apparently still a Genius and worthy of my £20 discount (you might be a genius too – try the “What’s your Wine IQ?” quiz)

Many of my readers are not from the the USA, so may not have seen this advert (unless they happen to love American Football) but take 2 minutes and 3 seconds to watch this Superbowl advert:

Now, think back about how often the logo, the car itself or anything recognisable as “the product” were shown. They were there (so you see them the 2nd, 3rd … 22nd time you watch the ad), but they are NOT the message. The message is bigger than that, and the clever thing is that a strong, emotional message can be associated with the product with good advertising. In fact sometimes it actually makes it more likely if the product is not shown (think perfume ads).

How many businesses in the wine industry dare to advertise like this? Think, in particular, of “generic adverts” promoting regions such as Bordeaux, Alsace, etc. Or the battle to be the packaging and closure (screwcap, cork, ..) of choice. More often than not, they focus on the bottle of wine … and fail.

I’ve seen a few decent wine “Country” adverts promoting the wine alongside food & tourism, but they hardly break any mould.

I should point out that although I like the advert, it has little effect on me. This is a good advert for someone for whom “luxury” is a reason to buy a car. I personally think that Detroit has failed so massively because they failed to understand that more people are after practical cars with a much reduced impact on the environment (and not just modified versions of the same old stuff). Just as an advert for a wine, or wine product, I have tried and know I dislike would not appeal to me. However, it is a good way of communicating their message and helps you to change how you think about it even if you don’t buy it.

Oh, and an unexpected celebrity endorsement also works too

Is anyone doing something similar in wine? There must be some good adverts out there in print or video

UPDATE: of course, one thing leads to another and I start to see relevant content everywhere (though not wine yet). I LOVED this advert too:

Do you know what Malolactic Fermentation is?

If you do, you are probably amongst the tiny, miniscule, one-bubble-out-of-a-bottle-of-champagne’s-worth fraction of people in this country, including most wine lovers, that do. Congratulations!

In that case, I wonder whether this advert by Champagne brand Lanson that I saw this week on the London Underground is for you? It is certainly not for the average Champagne drinker and wine consumer. The full text of the advert is:

“Since 1760, we’ve crafted Champagne the traditional way, choosing to avoid malolactic fermentation and insisting on 3 years’ cellar ageing. What emerges is an uplifting, crisp and fresh tasting Champagne with an exceptional purity of fruit.”

Does anyone in the wine business believe that consumers on the underground care all that much about the conversion of Malic Acid into Lactic Acid? I’m afraid that at best this advert was a bit of a waste of money for a good Champagne house, but at worst it confirmed that Champagne (and wine in general) is for snobs that know words like “malolactic fermentation”, “cellar ageing” and “purity of fruit”.

C’mon Lanson! Please use your undoubtedly strong brand, and your marketing budget, to do something a bit better and encourage the wine conversation. Oh, and while you are at it, you might like to improve your website – THAT is where you can reach out to wine experts and provide details of your winemaking.

Now, I wonder if there’s a name for the process of converting harsh, unapproachable advertising into well-rounded, consumer friendly material instead?

UPDATE 13:39 10/07/09: It occurs to me that really this is a classic error of selling Features not Benefits (loads of articles if you search, but this is a good one on selling the zaz.

COMMENTS: Thanks to all those who have commented on Facebook and on Twitter – it would be nice to pull some of that discussion together here too. Anyone?

I thought I should warn you that over the next few weeks you may see a few changes around here.

I’ve used the Blogger platform since the beginning, and I would recommend it for anyone starting out in the world of blogging, but if you want to develop your own ideas further, there are other alternatives that are more flexible.

I am working on the second generation of The Wine Conversation (with the help of some friends) and hope this will roll out in the near future.

In the interim, I may test out some ideas and features. Today’s change was the addition of Google AdSense. My intention is not to turn this blog into an advertising vehicle, but as I’m writing an article on how wine bloggers might become more professional and earn a living from this craft, I thought I’d get some first hand experience of the features and management of this now, fairly ubiquitous, solution.

Hopefully the new ideas we are working on will be of use and interest to you, so if you mainly follow me in your feed readers, do keep an eye on the site from time to time.

However hard we try to talk up the future for French wines, and France’s chances of developing a reasonable attitude to wines in the modern world, some organisation manages to come along and shatter our illusions.

Hot on the heels of the ruling about health warnings on Champagne articles, here is the latest news, courtesy of Decanter (assuming you can get their site working as it keeps crashing on me):

Of course this current ruling is aimed at Heineken, but I wouldn’t rate the chances of a Vin2.0 culture developing in the land of Liberty, Equality & Fraternity any time soon.