“Jacobs Creek has almost got a responsibility, as one of the major brands out of Australia, to teach the consumer about some of the great regions within Australia” – Bernard Hickin

A refreshing point of view by Bernard Hickin, Chief Winemaker at Jacobs Creek. [apologies for the background noise, but it was busy]

I was invited to take part in a dinner at 28-50 recently, to mark the (re)launch of Jacobs Creek Reserve range as region-specific wines, which coincides well with Wine Australia‘s under-fire “A+ Australian Wine” campaign, to act as a step-up from the Jacobs Creek Classics that have been around since 1976.

The wines themselves were interesting, individual and fairly priced (at an RRP of £9.99 but presumably not immune from promotions). You can read the reports of the evening from some fellow diners such as Stuart George (Creek Mythology) and Heather Dougherty (Jacob’s Creek at 28-50) and some thoughts of mine below. Overall I thought they were good, well made wines that did show something quite different from the normal ranges we expect from bigger brands, but I also felt that they showed quite a young character and might benefit from rounding out with a little extra age as, being all under screwcap, they have obviously developed slowly.

The pricing is the issue. So many of the producers who might be used by a region to showcase the uniqueness of its style are expensive, limited production wines – as was reasonably obvious at the recent Wine Australia tasting. Great wines but hefty price tags (not helped by currency issues, of course). These may be the very best examples, but being unaffordable means that the message does not get through to consumers – who then cannot be blamed for a lack of interest or knowledge of “regionality” in a country.

This is why what Bernard Hickin said struck me. You might disagree with the marketing and promotion activities associated with big wine brands (and they don’t come much bigger than Jacobs Creek) in the supermarket channels, but if the message needs to reach a mass audience, this is an effective means of achieving it. Having a big brand strongly committed to the cause, assuming it is doing a reasonable job of presenting the regional character, benefits everyone.

I’ve always thought that regional ‘brands’ were more interesting marketing tools than varietal labelling, so I look forward to seeing how this “regional” message is received by consumers, and how winemakers across the world take advantage of this.

Jacobs Creek Reserve Sauvignon Blanc 2010 (Adelaide Hills, Australia): strong passion fruit, not grassy, and mango skin aromas. The palate was tropical, but not overly ripe. Might need to round out a little

Jacobs Creek Reserve Chardonnay 2010 (Adelaide Hills, Australia): very ripe apricot and citrus nose, but on the palate there is a lot of weight and texture from the lees ageing (but not heavy oak). Well rounded and drinkable, but will it convert Chardonnay-sceptics?

Jacobs Creek Reserve Cabernet Sauvignon 2008 (Coonawara, Australia): Black fruit, but also some (green) pepper and that eucalyptus, minty notes associated with the region. Big texture. You can almost feel as well as taste the thicker skins. Pepper spice on finish masking the fruit a touch. Young but very nice.

Jacobs Creek Reserve Shiraz 2007 (Barossa, Australia): A (pleasant) burnt match, fruitcake nose. Some spicy, candied fruit but also a hint of spirit despite not being too alcoholic. Tons of acidity to accompany the fruit, so it never strays towards jammyness. Pleasant finish, but young.

I am extremely privileged to do the job I do. I work with some great wineries, travel to beautiful places and meet all sorts of interesting wine trade people; winemakers, marketers, writers, travel experts, art aficionados and more. Some of these I meet because of the paid work I do, others I meet for the stuff I do which is not paid for (like this blog). Either way, it makes me want to share the experiences, hopefully in a way that inspires people (rather than in a sort of nah-na-na-NAA-na sort of way!)

I say this because amongst these people are reasonably well-known individuals that many wine drinkers will have heard of and would actually love to meet and get to know. What often amazes me (as I’m quite new to this game, to be honest) is how lovely, genuine and fun they can be, yet how seriously I expected them to be before I met them. Many of these ‘celebrities’ (for the lack of a better term for well-known individuals whose names are recognisable) meet each other for interviews, at tastings and even informally, but the chances for regular wine drinkers to meet them are rare – and usually involve travelling to the winery, expensive wine dinners or really busy wine shows.

Today I met someone who is not only is responsible for much of the Australian wine we buy from supermarkets and specialists such as Majestic, but was also recently voted the 2009 IWC White Winemaker of the Year for some cracking prestige wines too. 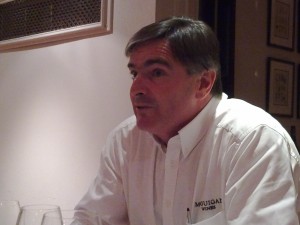 Neil McGuigan was on hand, along with Peter Hall, to talk about his wines, his philosophy and generally get us excited about the quality of today’s Australian wines – they are no longer just simple, fruity wines (“sunshine in a glass“), but competing at the highest prestige levels as well.

To make his point, a lunch was organised to match Michelin starred FRENCH (!) cuisine from the lovely Roussillon, with the wines of the McGuigan stable. The wine and food were both excellent, and were a surprisingly decent match for each other (the best match being the unusual sesame seed biscuit on the dessert with the Botrytised Semillon). The foodies present will tell you more details about the food (I will include links below as they post), but the wines were very good and very different from the popular image of “Australian” wines (I’ve recorded some brief thoughts below – unusually for this blog, but couldn’t really not include this here). If you haven’t done so recently, check out premium (£15+ per bottle) wines from Australia’s cooler regions and see what you think.

It struck me what a fun, relaxed, knowledgable and entertaining guy Neil was, and it seems a shame that he does not have a way (at the moment) of sharing his views and personality directly with consumers. As I said after meeting Rod Eastman, winemaker at Craggy Range, at a similar event, these are guys that could teach us so much and I’d love to learn more about their wines, their country and their philosophy DIRECTLY from them, via social media if necessary, as I’m sure would many others.

I seem to be a stuck record on this, but it is becoming my “mission” to get winemakers and wine writers to embrace social media channels and give a boost to the range of voices and content about wine outside of the US. I remain hopeful! Look out for McGuigan TV coming soon (I hope) 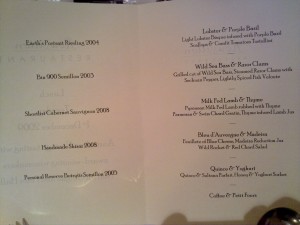 Other posts about the lunch:

The stars were the wines we had with the food, namely: