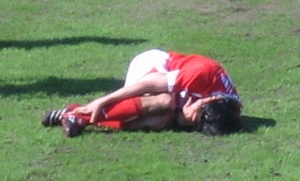 In the last few days, I’ve come to a realisation that there is something unpleasant that wine & football share, and it involves people falling over.

(Yes, this is my gratuitous World Cup post, including a tenuous, though hopefully interesting, link to wine).

I decided a long time ago, following the Heysel Stadium Disaster to be precise, that I didn’t really care for football, a.k.a. soccer (or most sports to be honest). However, I do care about sport in general, particularly with regard to making sure my kids enjoy a healthy and fun lifestyle. I do enjoy watching occasional, hopefully high quality, games at the final of big events such as Wimbledon, the Olympics and the Ryder Cup. I rarely care who wins, I just enjoy the moment, the excitement and, I hope, the spectacle of sportsmanship.

I did watch some of the World Cup, particularly as I had some personal stake in Spain doing well, and so I thought I would use the opportunity to let my 5 year-old daughter stay up late to watch her very first World Cup Final. What an opportunity.

Fouls, dirty play, few chances and, in general, a poor showcase for the sport. She went to bed at half time excited and high on the adrenaline from the aggression rather than the quality of play.

What made it worse was the excuse by the Dutch coach saying:

“It was still our intention to play beautiful football, but we were facing a very good opponent. … We did a good job tactically on them. We got into good positions at times. It’s not our style, but you play a match to win.”

Is that what I have to tell my daughter?

It reminded me that a few days earlier we had watched 7 year old boys at her school playing football in an early morning coaching session. In the 5 minutes or so that we were there, several kids not only fell over on the ground after fairly innocuous tackles, but lay there, clutching their legs and heads in absolute agony … until it was time to take the free kick. At one point, a child literally dragged his mate off the ball by the arm, and when challenged, he uttered these words:

“But that’s what they do in football”

Who are these kids’ role models? Any guesses?*

(* If there isn’t a football equivalent of the Razzies, celebrating the most theatrical acting on the pitch, there should be)

Wine, or more generally, alcohol, suffers from a similar issue. What do kids think about wine? Where do they see it being consumed?

If we want kids to have a healthy attitude to alcohol, we need to give them experiences and role models to use. This does not meet not drinking around children as some suggest. Don’t get DRUNK around children, but do show them how adults can enjoy their drinks responsibly.

Just as it is a shame that my daughter’s first major lesson about football was about yellow cards versus red cards, we don’t want their first lessons about alcohol to be about hangovers, aggression and car accidents. Hopefully we can be more positive.

If parents, or any of us, aren’t acting as fair role models, where else will children turn to for guidance? What you don’t want is to see your child, hanging onto his friend’s arm, falling to the ground saying:

“But that’s what they do in the pub”

For more information, please check out the campaign being run by Wine In Moderation, a pan-European programme promoting responsible and moderate wine consumption

The Alcohol Education and Research Council: See (“Why do people drink at home? An exploration of the perceptions of adult home consumption practice“) 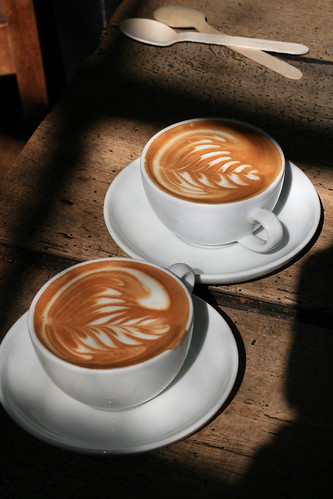 Just back from a great chat with Dan Young (aka @youngandfoodish), author of several books including Coffee Love: 50 ways to drink your java, and blogger at YoungandFoodish.

I really wanted to meet him and pick his brains about where to start my exploration of Coffee Culture as it relates to Wine Culture, but as with all these meetings, nothing stays on topic for long and we discussed wine, retail, weddings, photography, The Wire, video, culture and more. I love the fact that twitter, and social media in general, allows me to meet such diverse people and start a conversation so readily. I love the fact that we all have experts at hand who are prepared to listen to our questions.

I have lots of new ideas “brewing” and I need to “filter” them into something meaningful, but here are some general thoughts that emerged:

Lots to ponder, and I need to learn more about where coffee comes from and the many ways it can be enjoyed. I do feel that there is a combined “Wine and Coffee” experience event in my near future. Fancy it? How do you see it working?

BTW, we had some excellent coffee at Monmouth Coffee in Borough Market. Above is a picture of two particularly nice “Flat White” coffees.

Expect to see a fair bit about coffee and wine over the next few weeks as I’ve “discovered” that there are a lot of similarities between the two and maybe learning about coffee will give me a different perspective on wine.

Rather than a post this time, here is an AudioBoo I posted earlier.

If you are interested in some of the things I’m planning (even if I have not told you what these might be), leave me a comment here.