“I’m like a great big dark cloud, floating over the land, discharging my creativity in a sudden burst, like a lightning storm. If I were on twitter, facebook, etc. I feel I would waste the energy in lots of small bursts. I do not want to do that. You won’t find me on social networks. … Of course, that’s what I feel today and it could change.” (paraphrased, from sketchy memory) – Iain Banks, 2012 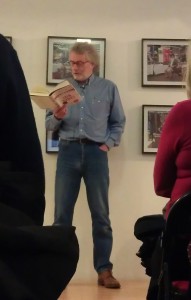 I attended a book reading & signing for Stonemouth by one of my favourite authors last week at Foyles in London. Iain Banks is the author of not only some amazing fiction, such as Wasp Factory, but also of science fiction (under the name Iain M. Banks). I particularly recall a book called Feersum Endjinn that included a very early model for Wikipedia/Internet he called The Crypt. He comes across as lots of fun, very creative, very Scottish and I happen to know he is also a wine lover (he admits to a fondness for Chateau Musar which also appears in a couple of books).

I took the opportunity to ask him if he used social media in his creative process, and I got the answer above. As an advocate of these platforms for wine, I feel it is a shame, but I totally understand what he is talking about. He says he writes his books in one, sudden, 3-month flash (after 9 months of “thinking about thinking, thinking, thinking about planning, and planning”). For authors who have to publish large creative works like a novel, I can see how the ongoing conversation might be a distraction. People would expect him to be creative, funny, innovative all the time. He admitted that if it helped him sell (a lot) more books, he’d probably do it, but I’m guessing he’s not desperate for cash after his 26 or so published works, so it is unlikely to happen.

I see, on the other hand, that for other creative types (like bloggers), the creative process is much faster, less intense in some ways, and the potential for the social conversation to spark more ideas and deliver value, more direct.

I do find myself, from time to time, involved in a discussion or reading a post, and thinking: “Hey, I wrote about that and covered it already somewhere …” then realising that it was never a fully formed thought, but just a comment or status update, and therefore seen by very few. If only I’d bothered to see it through, maybe it might have advanced the discussion a little further.

I know this is a feeling that many wine bloggers have experienced, but despite the many benefits of having channels for “micro-blogging” and reaching large audiences of followers and friends with wine content, it is fairly certain that this is diminishing the output of truly creative, fully-formed, valuable thoughts on our blogs, and that is a shame.

Is it time to change the balance and get back to longer form publishing? Save up some of that electricity for a proper show of lights?

This is a topic I know will be coming back to, including at the EWBC (and see these excellent points made by Andrew Jefford on the same subject as well).