Read this for an example and a couple of tools that might help change your mind (disclosure; Vrazon is reseller for the second) 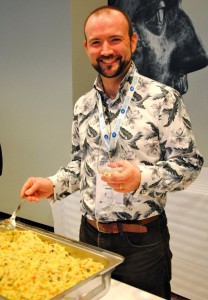 What I Wore Today (almost)

A post by a friend, Poppy Dinsey (@poppyd) made me think about this issue today. Since I met her, via twitter of course, she has gone on to launch an internet fashion sensation – WIWT (What I Wore Today) and as she says:

I have achieved endless things because of tweeting. Twitter is still one of the largest drivers of traffic to WIWT.com, a business I was only able to set up because of an idea that spread through – yep, you guessed it – Twitter. Twitter has enabled me to market my business, my sense of humour, my opinions, my style and my writing to literally millions of people. I’ve been able to work with brands from teeny tiny boutiques and emerging designers to global giants like Vodafone, Universal Pictures and Unilever, often solely because somebody has found me on Twitter. I’ve never once paid a PR agency, but have appeared in nearly all the mags and papers of this country for something or other…again, often simply because of journos following me on Twitter or someone recommending me via Twitter to a journalist who otherwise would never have found me. I know this isn’t your ‘usual’ Twitter experience, but it’s one I’m massively grateful for and lord knows I’ve put a LOT of time into tweeting to make it happen. I didn’t have ANY contacts in fashion, tech or property when I started in each of these industries…but I made sure I made them using Twitter.

It has been hard work, but she had a goal, and put in the time and effort. 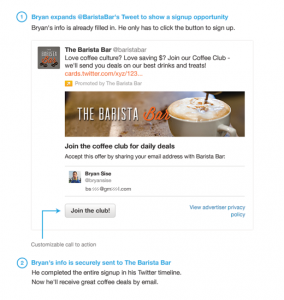 Today Twitter announced a new feature that will make it MUCH easier to capture important, and USEFUL, information on your audience: Lead Generation Cards. This new tool will allow businesses to embed a small form in a tweet that users can complete and send back with little or no effort.

This will allow wine businesses; wineries, retailers, journalists selling subscriptions and so on, to get the three most important bits of data for generating a return on investment in twitter; a user’s name, Twitter handle, and email address.

Twitter is great for several things, namely conversations (that you can start, join, or listen-in to), quick questions and answers, and sharing links. However, businesses should have a goal and twitter is not the place for lengthy, detailed explanations, private conversations or selling. Email still is the best way to do this, but if you take them together, you can not only capture people’s email addresses, you can build the kind of relationship that ensures they actually open and read them.

Vrazon has discovered a great tool for getting to know the audience you have painstakingly built up with your time spent on twitter, facebook, linkedin and through email; Nimble. 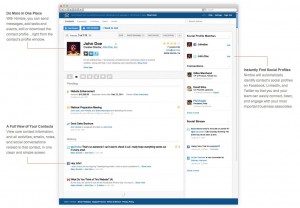 Nimble is an online CRM tool that is specifically built to give you a much broader picture of the people you follow by combining all a user’s profiles on each of these social networks into a single place. You can have thousands of followers on Twitter and Facebook, and many professional links on LinkedIn, but combining this information is EXTREMELY hard.

They key, of course, is email because it links them all together.

An email address is still the most valuable bit of information, even in the age of the social network.

All of a sudden, time IS money because you can finally convert effort into leads.