I attended a “Spanish Wine on the High Street” tasting recently. The idea was to showcase the best, or most popular, Spanish wines in the ranges of the UK’s top supermarkets and high street wine retailers (or what’s left of them), as selected by their buyers. There were wines of many styles and prices there, including very expensive ones (and lots of Rioja). I have published some of my thoughts from that tasting on my Posterous blog, but I want to explore a separate question here.

What would you expect for 61p? 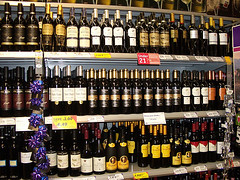 We all want a deal. We all love finding a bargain, where the value for money, the “bang for your buck”, is great – especially if we are the ones to discover it and tell our friends and gain ‘kudos’. But sometimes, things might also look, and taste, too good to be true.

One of the wines was from a region already known to make decent, uncomplicated and good value wines. It was not stunning, but it was certainly drinkable, with nice fruit and a clean finish. The surprise was that it was selling for only £2.70 a bottle.**

Normally, if I even tasted a wine that cost this much, I’d expect something virtually undrinkable, simply because it is not possible to make a wine and sell it at this price. So, what does it mean?

I should say I know NOTHING about the deal that got this wine listed in this retailer, but let’s face some basic facts:

That 61p has to cover the cost of:

Does that sound likely?

Wineries do their utmost to make a good wine in such a volume that they can make economies of scale and sell it at a reasonable price, but this is extreme. So what are the implications?

These deals are driven by a certain level of desperation. No winery can make money on it, but there are circumstances where “moving” a wine even if it is for almost nothing, is cheaper than the alternative. If your tanks are full of a good wine you have not been able to sell from last year, and you NEED those tanks for this year’s wine, and you can’t simply pour it down the drain … what can you do?

Retailers will gladly take it off your hand if they can make money from it. They’ll sell it cheap and get folks flocking to their shops.

The knock on problem is that we consumers say “Hurrah!” as the value for money is apparently very high, and we love spending so little.

All the good work by wine lovers to explain the agricultural, artisanal, low-margin, high unique value proposition of wines is lost in a storm of price discounting.

Selling decent wine at throw-away prices changes the expectations about wine as a whole, and particularly the country that it is associated with. It associates it with “cheap” wine, a moniker that is VERY hard to get rid of later (just ask Bulgaria, Portugal, and even Chile).

Too often they become, and remain the “best wines for not a lot of money” instead of the “best value for money” which they aim for.

I totally understand why wineries can end up in this situation in the short term, and that supermarkets are also commercially driven, but it does wine no good. If this becomes the norm (as, arguably, it has), good wineries that have to sell at properly commercial prices will not find space for their wines and are forced to compromise as well, or go out of business.

At the end of the day, cheap wine is usually terrible, undrinkable, nothing more than slightly flavoured, acidic alcohol. You get what you pay for … generally.

But if you buy that wine, and it actually tastes good, then what incentive do you have for spending more? After all, if we keep spending at this level, more wineries will be desperate enough to sell wine at these prices. Until they all close.

How can we change this situation, if retailers don’t care? Whose responsibility is it? Well, the government is poised to create a “law” to stop selling “below cost” … but how do you define that, and where does the money go? A topic for another day.

I think that good wine CAN be too cheap.

Do you agree? Do those who cannot afford more expensive wine ‘deserve’ good wine at cheaper prices despite what it does to the industry – is it just a case of survival-of-the-fittest?

By the way, for a variety of reasons, I am not mentioning the wine, producer or retailer that occasioned this thought. It is a general point I am making.

** I discovered that the £2.70 was a promotional price during a 25% off promotion. However, as this simply removed one aspect (the retailer’s margin), the general point remains although it would have to be taken into account

This post follows neatly, although it wasn’t planned that way, from the last one.

A wine region in Spain wants to invite a select group of influential bloggers to visit their region, possibly in June, to learn about the wines, about the local food it matches with, and a little about the region itself as a tourist destination.

I’ve said before that if we want to make wine more relevant and less threatening to more people, we need to “reach beyond the wine bubble” and talk to others who also influence consumers interest in wine, such as foodies, event organisers and travel bloggers. If this group felt comfortable discussing and recommending wines, the Wine Conversation would be transformed!

So, I’ve offered to put together a list of interested UK bloggers, but also of those active in other forms of Social Media, so that this wine region might decide to invite a broader selection of them and thus have lots of different people learn more about it.

Disclaimer bit: this is nothing to do with the wines or wine regions I represent, it is on behalf of a friend who is working with the wine region in question, and who asked me to reach out to my UK followers.

The cost of the trip will not be insignificant for the wine region (few wine regions have big budgets) and they hope to have those who come write about their experiences and share them with their audiences. This is easiest where writing about the trip will be ‘in context’ for those bloggers. For example, it might not be that easy for a tech blogger to suddenly switch to writing about great wines from Spain (although I accept that depends on the blogger).

Also, why bloggers? All can be considered, but from the region’s perspective, they’d obviously love to have the kind of content, reach and permanent record offered by blogs (and I mean written word, photography and video). Remember, this is a BIG step for a wine region only used to talking to wine journalists working with established media.

Finally, I’m afraid they cannot bring everyone. I believe the trip will be for 5 or so people, so I’m afraid quite a few of you will be disappointed, but I promise to let everyone know if more such trips arise, so it’s worth getting involved anyway. I have no idea what criteria they might use to select a group, beyond making this a fun, influential and eclectic mix to see what an investment in Social Media might deliver for them.

I already have a pretty good list of foodies and some events people, as well as a few unusual requests that could be very interesting too, but if you want to throw your hat in the ring, you can do it publicly by leaving me a comment here, sending me a Direct Message on twitter, or an email at: thirstforwine AT gmail DOT com – and if you were to say WHY they should choose you, that might help 🙂