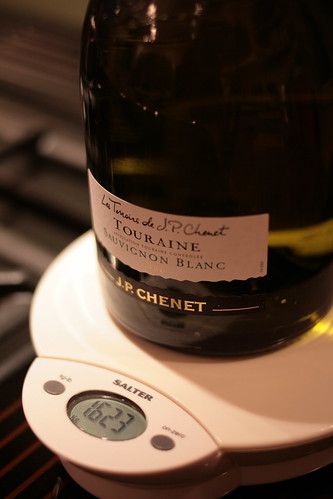 In this age of environmental consciousness (and general lack thereof) there are certain things that really stand out as wasteful.

The packaging on fruit and vegetables, the coating added to tablets for washing clothes and dishes, and packaging materials for goods bought over the internet (if couriers could just be trusted to treat ‘fragile’ goods properly much waste could be avoided).

One thing that I don’t normally object to is glass bottles for wine. I must say I am still of the belief that this is the best alternative at the moment, even if recycling rates could be improved.

I was struck, therefore, when I saw a bottle on the shelf of my local Co-op that looked ridiculously large and heavy, and not only that, was selling for £3.99 (that’s around $8).

J.P. Chenet is already known for its quirky bottle shapes which have helped to increase its brand profile. But this bottle, from what appears to be a premium range, was like the original bottle after a course of Mr Universe quality steroids.

I was intrigued, so I parted with the paltry sum and took it home.

Now, I have weighed a number of other bottles in my rack and the average weight is around 1.25kg when full, so imagine my surprise when this came in at 1.623kg – thats a 30% increase.

So that is where all the missing glass in Europe has gone!

Maybe in future, those consumers just getting into wine might, instead of using the time honoured calculation of “best value”: BV=ABV/RSP (otherwise known as ‘most alcohol for your money’), might instead say something like:

“Wow, this Argentinian Chardonnay weighs a ton and is only £4.49!”
“That’s nothing! Over here is Chilean Cabernet is a ton and a half and is just £4.27 if you buy three bottles”

Let’s just hope that we live to see the day – or maybe not.

Oh, and unfortunately the wine delivered exactly what the price promised, not very much. How could it, after spending so much on packaging??